Apart from a few notable exceptions, there’s been an indefensible level of silence about the firebombing of Freedom Bookshop on Friday morning. Only one TV channel, Press TV, bothered to send a camera crew to East London.  ITV, the Evening Standard and the Guardian did write stories about it, even if the latter did use the bizarre phrase about the shop that “[i]t claims to stock thousands of books, newspapers, pamphlets…” It’s a bookshop, what exactly makes a statement of easily verifiable fact a claim?

END_OF_DOCUMENT_TOKEN_TO_BE_REPLACED 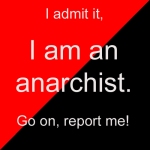 END_OF_DOCUMENT_TOKEN_TO_BE_REPLACED

In the week or so since the G20 demos, report after report of police brutality have emerged, both at the big demo on the Wednesday and at the squats and smaller Bank of England demo on Thursday. The mainstream media is gradually catching up with what’s been up on Indymedia, Libcom and other radical websites for days. The police violently attack the Climate Camp, the police pointed Tasers at non-threatening people on the floor of the squatted convergence centre, the police did lots of bad things and the IPCC is investigating.