Update: Following these two successful meetings – and also raising the issue at tonight’s NUJ Claudia Jones lecture, I’ve set up a new mailing list and will discuss setting up a follow-up discussion and planning meeting with NUJ colleagues. Stay tuned for further details. 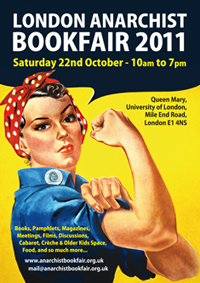 I’m going to be speaking at two meetings on the same topic in the next couple of weeks, in the aftermath of Hackgate and Murdoch’s closure of the News of the World. First up is a session called Reclaiming the Media I’ve organised at the London Anarchist Bookfair at Queen Mary, University of London, on Sunday 22 October. It’s in the Mason lecture theatre – also known as the big venue – at 12pm and will feature investigative journalist, Heather Brooke (author of The Revolution Will Be Digitised and Silent State) and digital rights activist Becky Hogge (author of Barefoot into Cyberspace) with another name or two to be confirmed.

This promises to be a lively session looking at the aftermath of Hackgate, independent journalism and the needs to create new models of media ownership and take the media, online and offline, back from the multinational corporations. The venue seats 300 and it’s completely free, so the more the merrier – bring your friends. You don’t have to be an anarchist to attend and you might find some interesting books at some of the stalls after the meeting.

Then just a few days later, on Wednesday 26 October, I’ll be on the panel at the similarly named Reclaim the Media meeting at Bloomsbury Central Baptist Church, 235 Shaftesbury Avenue. This meeting, organised by NUJ activists, will also feature John Pilger, the world renowned investigate journalist and film-maker,  Becky Branford, NUJ rep at the BBC, and Gary McFarlane, NUJ activist and part of the Tottenham Defence Campaign. This meeting is designed to bring people together to discuss and analyse the key problems within the industry that led to the hacking scandal of July.

It’s also hoped to act as a launch pad to get organised build a campaign to reclaim the media and stand up to the assault facing media workers under the recession. This meeting is £3 a ticket (£2 unwaged).

As cuts destroy editorial capacity in newspapers, with cuts coming to the BBC, it’s time to build a new kind of media in the UK & Ireland – media that focuses on empowering the public through information and creates a two-way conversation with the people formerly known as the audience. The giant corporations who currently control the media have shown themselves incapable of doing that, so it’s time to reclaim the media and do it ourselves.

2 thoughts on “Two meetings on reclaiming the media”