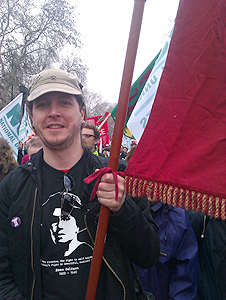 I spent quite a few hours on Saturday, 26 March, walking the streets of London fairly slowly with approximately half a million other people. Some of the time I carried a flag, for a short while I help carry the national banner of my union, the National Union of Journalists. When I finally got to Hyde Park, some friends and I walked down towards Victoria Station to find a pub for a much needed drink, then my partner and I went and got some food and finally home, exhausted.

That was probably like the experience of most of the rest of the 500,000 marchers at the TUC’s long-awaited March for the Alternative. Amongst those who walked themselves to exhaustion and then went hope were probably quite a number of other anarchists like me.

That’s not the how the media decided to portray the day or anarchists . Oh no, half a million people peacefully walking together to show their opposition to the cuts is less of a story than a few broken windows.

The date of 26 March has, for months, been a date in every activists’ diary. Numerous groups were making placards, my union got loads of new flags made and some groups were planning to do more than simply walk up the road and go home.

It’s very important to distinguish between some of these different groups – something more than a few media outlets have not been willing to do. UK Uncut don’t break windows or spray-paint anarchy As on the walls. I’ve reported a few of their actions and they’re a polite and peaceful bunch of fluffy activists who like to sit on the floor in Top Shop or outside Vodafone to make their point. According to reports, when they occupied Fortnum & Mason, they sat around, sang songs and read poetry.

Then there’s the “black bloc” group, except it’s not a group, it’s a form of tactical organisation. Black blocs came to promimence with the convergence demonstrations around 10 years ago in the global justice or “anti-globalisation” demonstrations. It means people dressing in black, masking up and sometimes engaging in some property damage and fighting the cops. It’s primarily a tactic used by some anarchists – highlighted by the red and black anarchist flags many carried.

Today saw a considerable number of largely young (some very young) dress up and do all the things expected of the black bloc, much to the delight of the UK’s broadcast media (and presumably the ‘papers too). Hundreds of thousands of people walking peacefully – an inspiring mass of colour and diversity – isn’t a story, a few broken windows and paint-bombs is.

Accusations and condemnations will fly in the coming days, talk of infiltrators, violence and criminals. And there will probably only be a few lone voices who will point out that there is real anger out there and a palpable sense of powerlessness. Half a million people marched and will probably be ignored. Is it any surprise that an increasing number of young people decide to act out? Many of these are probably veterans of the student demos – kettled, batoned, charged once, twice, three times.

This is not to defend their actions. I’m not interested in defending or condemning what they did. I’m much more concerned with the reality that this kind of activity will only increase because these kids see no alternative. Much of the trade union movement has spent over a decade living in complacency as the numbers of people in trade unions continued to decline. The unions are nowhere near the position of strength they held before Thatcher launched her onslaught. Too many unions saw mergers instead of recruitment as a way to consolidate their power.

Many of these angry young people will be unemployed like many young people in general. But, for those who enter the workplace, they’ll probably find themselves without the protection of a trade union, being exploited for minimum wage with no security.

Getting nearly half a million people on the streets is impressive, but it’s not a reason to pat ourselves on the back. Every one of those people should try to recruit one person they know to a union – any union. If the government ignores today’s march, then seeing the numbers of people in trade unions suddenly jump by 500,000 would really make an impact. It will also mean that we have much more strength when we start the wave of co-ordinated industrial action the government has made inevitable.

And finally, for those who condemn the black bloc for “violence”, talk to someone who was partying in Trafalgar Square as night fell on 26 March. The police showed them, once again, where the real violence in society is. The police, who will protect banks and shops with full force, but will do nothing to defend libraries or hospitals from the government’s far worse vandalism. The police, who with truncheon and shield, showed every protester left in the city that the state has the monopoly on force. The police, who have been congratulated by some and criticised for not going far enough by others, proved once again that people are worth less than property in the UK – heads are worth less than windows.

8 thoughts on “Reflections on the 26 March demo”